After a long day off from class on Monday, September 6, 2010, three young men met to skateboard at the notorious hot spot on Temple University’s campus: “The Cecil Skate Park.”  Isaac Jaegii, 19, Colin Keaton, 19, and Brian Leddy, 21 are just three of hundreds of students and local residents who meet here everyday to skate, enjoy each other’s company, and some even come here, “just to blaze,” according to Leddy.

This small flat area is located just off the corner of Broad Street and Cecil B. Moore Avenue in North Philadelphia.  Skaters choose this spot as their favorite for various reasons.  ”It’s close [to campus],” said Leddy, “It’s simple.  We don’t get kicked out.”  To some, this spot is merely a hang out, but for these boys, they come to practice their moves and learn from each other.

“Everybody’s friends,” says Jaeggi, a skater of 8 years.  But sometimes, participants in the sport here do not always know each other.  ”Nine out of ten times we don’t know each other.  But everyone gets along.”

Brian Leddy explained how this hot spot may have come to be.  ”I know the people who started skating here and making it a Temple after school place.  One filmmaker made a video here.  After that, more and more people started skating here.”  Leddy and his fellows reminisced about a time they did cause some problems in the neighborhood.

“We got a noise complaint, one time,” said Keaton.  ”We got kicked out because we had a ramp set up with a grill, and we had a keg in the trash can.”

Other than that, this park has proved to be a peaceful place for amicable students and residents to take turns in skating among the planted trees and on the steps.  ”They put knobs [on a concrete platform] last spring – basically hating us.  They filled rocks in places we used to make ramps.” But the crew admited, they love skating here and spending time among their fellow skaters. 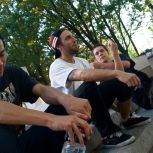