Now that your astonishment has subsided, let me try to save some face.  On a beautiful Saturday afternoon, a friend of mine was determined to teach me how to ride a bike.  Walbert Young, with about 20 years experience on two wheels, exhibited great patience as I stalled to hop on the bike that he fixed up for me to practice with.  Awkwardly clambering over the seat was quickly corrected as Walbert showed me an easier way to swing my leg over and get on the bike.

It started just as it did over ten years ago.  My preconceptions that one can just mount a bike and ride away in an instant were soon squashed by gravity.  Actually, I remember falling more than anything else – and never trying again.  In all these years I have yet to fathom balancing my 135 pound body on two thin wheels that cover a tiny area of ground.  I cannot comprehend the bicycle as an extension of my own body.  I just don’t get it.

Just like a dad, Walbert was there along side me the entire time.  However, unlike a carefree child, I was not speeding away leaving him in the dust.  I started and stopped and started and stopped hundreds of times.  It was not easy!  It was immediately evident that teaching me how to properly brake was in order before I destroyed my ankles.

Braking: got it down.  Just squeeze the handlebars – what’s so hard about that?  I still couldn’t balance.  Braking was now my safeguard against violently plummeting into the pavement.

“Keep one foot on the ground and push the opposite pedal with the other,” Walbert calmly suggested.  Maybe once I got balanced I could have tried that.  As soon as I’d lift my left foot onto the pedal, I’d lean drastically to the right.  “Push to the left!  Push to the left!” meant nothing to me.

“The faster you go the easier it is to balance,” Walbert told me numerous times.  Once again, as soon as I’ve mastered this balancing act, maybe then I can think about speed.

“Keep the front wheel straight!” I’m trying! It went on like this for two hours on the top level of the Liacouras Center parking garage.  I watched the shadow of my stumbling body grow longer and longer with the sunset.

How bizarre.  A simple task any 9 year old can perform is impossible to me.  I have a decade on some of these kids whizzing around and I just can’t do it.  I can control a two-ton vehicle at 80 mph on a highway, but can’t ride a bike.

I can ride a bike.  I am able to.  But being as old as I am, I’ve thought about it too much.  When kids learn, they don’t think about physics, gravity, or that fact that everyone and his cousin knows how to do it – they just do it.  It’s just another step in life that I seem to have missed.

I tried my best not to get discouraged. After countless attempts, I just didn’t want to try anymore.  But that’s what got me here in the first place – giving up.  When I was about 6 or 7, I was a pro at biking with training wheels.  But one seemingly exciting day in my young life, my mom took the trainers off and let me try a two-wheeler.  Ground – scrapes – tears.  It was all over.  There was no falling to the ground this time around; I’m too haughty for that.  But that certainly doesn’t say much for what I walked away with.

I can’t imagine how Walbert felt.  For someone who finds bike riding just another part of life to teach someone of equal maturity, this must have been quite frustrating.  He was a trooper, though, and stuck it out with me through all the trials and errors.  If I keep trying, maybe one day I’ll get the hang of it.  You may be thinking that is inevitable, how can I not get it?  I can put myself in the mind set of a bike rider all I want, but the physics remain the same.

“I don’t mean to toot my own horn, but I’d say I’m a pretty good teacher,” Walbert told me the day before.  He has taught others just like me – in their twenties!  I didn’t feel so bad after hearing that.  But if I got anything at all out of this experience, it was one minor detail he omitted until the very end that made me feel even better.  “I never said any of [the others] learned it in one day.” 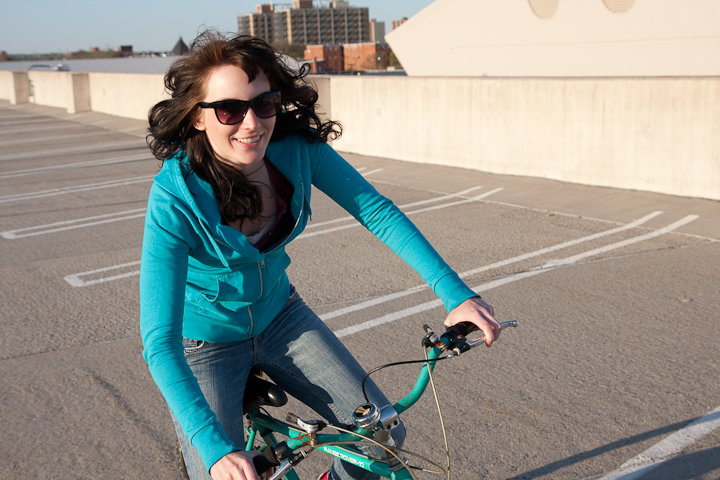